Items manufactured in southern Maine, then shipped to Augusta for installation.

AUGUSTA — All the woodwork, countertops, sink tops, windowsills and even the protective strips along the walls and the corner protectors are coming from a single firm in Windham.   Dan Berube, onsite foreman for Windham Millwork, talks about the cabinets that workers have already installed during a tour on Dec. 4 at the new MaineGeneral regional hospital in Augusta. The cabinets, counters and some other items are pre-made back in the shop at Windham Millworks before being shipped up and installed.

It’s all part of the emerging hospital under construction in north Augusta, where Maine General Medical Center is spending $312 million to consolidate operations in a modern building.

Earlier this month, workers from Windham Millwork Inc. unloaded prefabricated counters, countertops, cabinets and other items onto an upper floor. They are destined for the nursing and clinical stations in the patient wing and elsewhere in MaineGeneral Medical Center’s new 192-bed hospital. 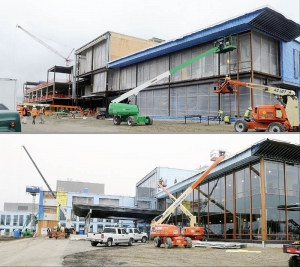 “I’m just an assembler,” said Dan Berube, the onsite foreman for Windham Millwork, pointing to one of more than 90 stations. The solid surface, antimicrobial-coated countertops arrive with cutouts for electrical and computer wiring connections. “For the most part, it’s all pre-made.”

The items are precut in the Windham manufacturing plant and need some fitting and filling.

“There’s a lot of preparation,” he said. “It’s a big item. The planning is what makes it work out good.”

Windham Millwork’s share of the hospital project is scheduled to be completed in June 2013, six months before opening day.

The cabinets and woodwork are delivered to the site in quantities of about a half dozen or so, allowing the crews to install them as they arrive. “I try to manage the crews so there’s not too much stuff that it’s in everybody’s way,” Berube said.

The 10 installers receive shipments twice a week, and recently Berube literally was handling the deliveries, tethered to a safety device as he reached out an upper-floor opening to guide in the pallets of products. He’s also the runner, chasing down missing parts and checking details.

Along with a copy of the installation drawings taped to the wall at each station, workers alsohave guides in the form of floor stencils everywhere, indicating what goes where.

“You walk into a room and the layout of the room is on the floor,” said Tim Nunn, vice president of sales for Windham Millwork.

While some rooms remain as metal-framed shells, others have sinks, cabinetry and even a vinyl wall protector on the wall behind the patient bed. The accouterments are all by Windham Millwork.

In the more finished areas, Nunn points to some of the 85,000 square feet of vinyl wall protector. 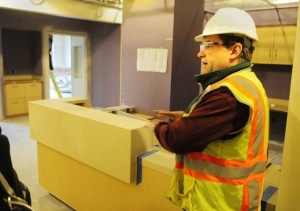 Staff photo by Joe Phelan
Dan Berube, on-site foreman for Windham Millwork, talks about the cabinets that workers have already installed during a tour on Tuesday Dec. 4, 2012 at the new MaineGeneral regional hospital in Augusta.
The cabinets, counters and some other items are pre-made back in the shop at Windham Millworks before being shipped up and installed.

“It’s something you wouldn’t think a millwork company would do,” he said, “but why not? We’re here.”

For Windham Millwork, the $5.2 million casework contract with the hospital is its largest ever, and four times the contract it held to do similar work at the Harold Alfond Center for Cancer Care, which is on the same campus as the MaineGeneral Medical Center’s new hospital. Berube was chief of the installation crew there as well.

College. It will be working on the new computer science center there as well, said one of Windham Millwork’s owners, Chad Pulkkinen.

“We were founded in 1957 by my grandfather Walter Pulkkinen,” Chad Pulkkinen said. “My brother and I are third-generation owners, and our father is the current CEO. We have over 65 employees at Windham Millworks, Inc., and a 65,000-square-foot facility, which allowed us to be the sole millwork company on this project because of our size and experience.”

The hospital project makes up a third of the company’s annual work.

The firm came on early, working with the architects and making suggestions. While a number of other firms joined with others to bid on such a large project, Windham Millworks was large enough to do take the interior casework by itself.

“I think they’ve always been a great partner for us, and we continue to focus on employing Maine people,” said Chuck Hays, president and chief executive officer of MaineGeneral Medical Center. “Ninety percent of people working on the job are from Maine, and 96 percent of the contracts awarded to Maine companies.”

An average of 645 workers have been on the site during the last two months, he said.

“This is by far the most organized and cleanest job site we’ve been on,” said Scott Gordon, Windham Millwork’s chief operating officer.

The interior of the hospital building was warm, with heating fuel provided by large propane tanks visible at the rear of the hospital. A permanent natural gas supply will come via a pipeline, which is being installed along Old Belgrade Road.

Ron Kuusela, Windham Millwork’s project manager, continually eyed the low windowsill areas still awaiting drywall before the sills themselves can be installed. A few were already complete in the classroom area near the hospital’s main entrance. He was waiting for precise measurements.

A number of other tradespeople were hard at work as well — electricians pulling cables, and crews even working outside to get some landscaping in prior to the cold weather.
Much of the work now is aimed at buttoning up the building for winter so those inside can continue working in relative warmth.
Some areas lack window glass or plastic covering the openings. Hays said glass installation and brickwork will continue all winter.

When open, the regional hospital will replace the inpatient functions at MaineGeneral Medical Center’s Thayer campus in Waterville as well as the hospital on East Chestnut Street in Augusta.

The cost of entire hospital project, including financing, is estimated at $412 million, including $10 million in improvements for the Thayer campus.

Site work began in August 2011. The opening date is a full six months ahead of the original timetable.

A year ago, there were three cranes and small, temporary buildings as well as numerous construction and workers’ vehicles on site. Now the hospital has been framed out entirely and partially finished, parking lots and access roads are paved and lighted, and some of the exterior grounds work is complete.